My boyfriend and I planned to go to Amsterdam and Berlin this spring but as everything was shut down and we weren’t able to cross borders we postponed the trip. Luckily, we bought roadbikes before the lock down and went cycling quite often during April. As I miss travelling a lot, I suggested to do a bike trip before the lectures start again. So we packed our stuff and went on the road for two days.

On Thursday morning we prepared everything, installed the carriers, grabbed our sleeping bags and squeezed some fresh clothes into the bags, filled up the water bottles and prepared some snacks. We wanted to travel as light as possible and buy our food on the road right before eating. 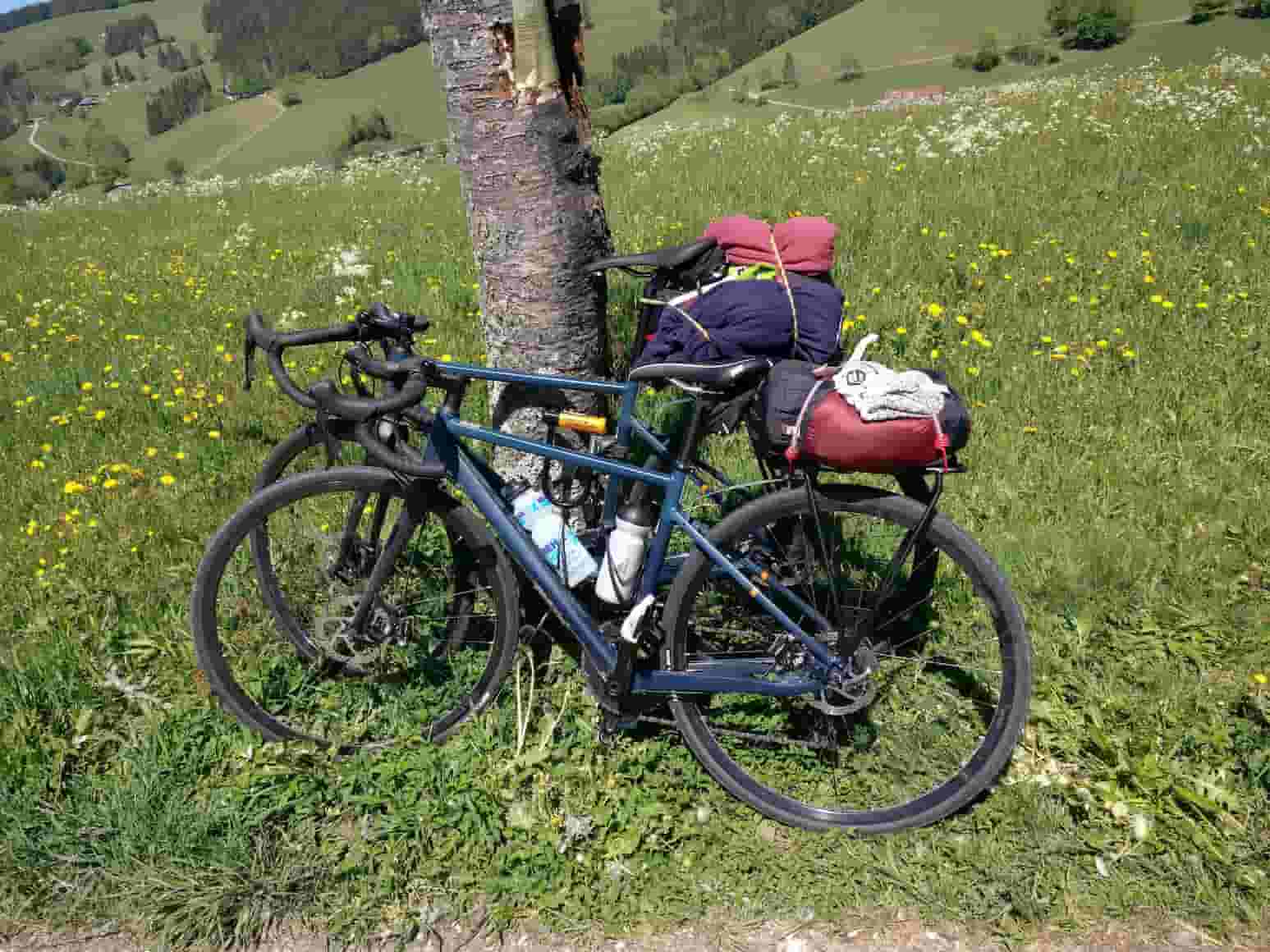 Shortly before lunch time we left and cycled along the river Dreisam into the black forest. The first climb was to the village Sankt Peter and from there we continued a newly made road to Sankt Märgen where we had a little lunch break. I’m out of energy in no time and need food every other hour. 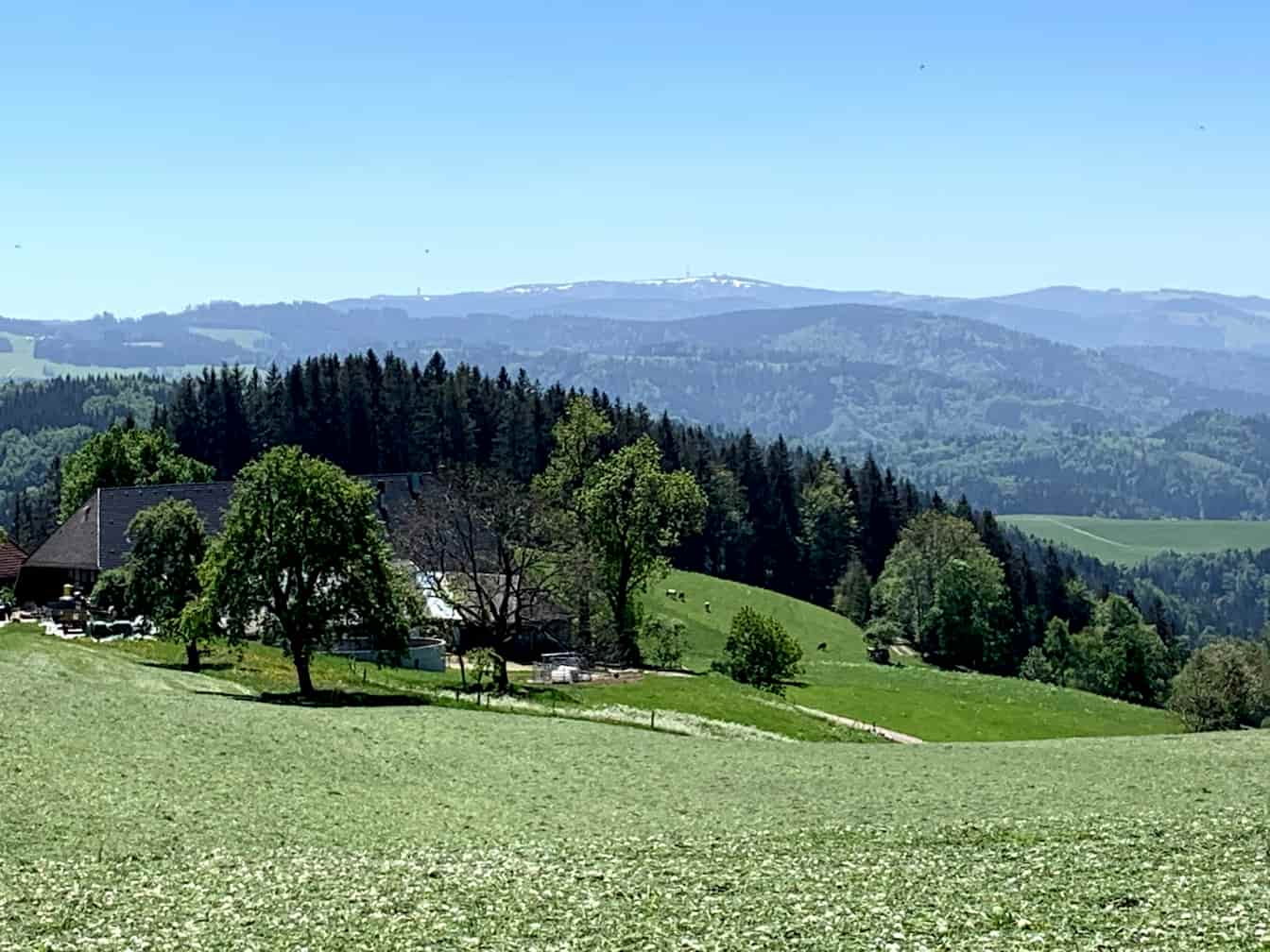 After cycling through a valley and buying some food in Neustadt, we had proper lunch at the Titisee. We looked for a nice place at the lake to eat our self made wraps. Of course we didn’t bring a knife with us (we completely forgot everything related to food) and had to buy one to cut the vegetables. We sat on the grass in front of a hotel and they told us to leave, but after asking we were able to finish lunch. Although we would have liked to stay at this beautiful place a little bit longer, we continued right after lunch and cycled along the lake in the direction of the Schluchsee. There we took another break and went swimming. It felt really good to go into the cold water after all the cycling! 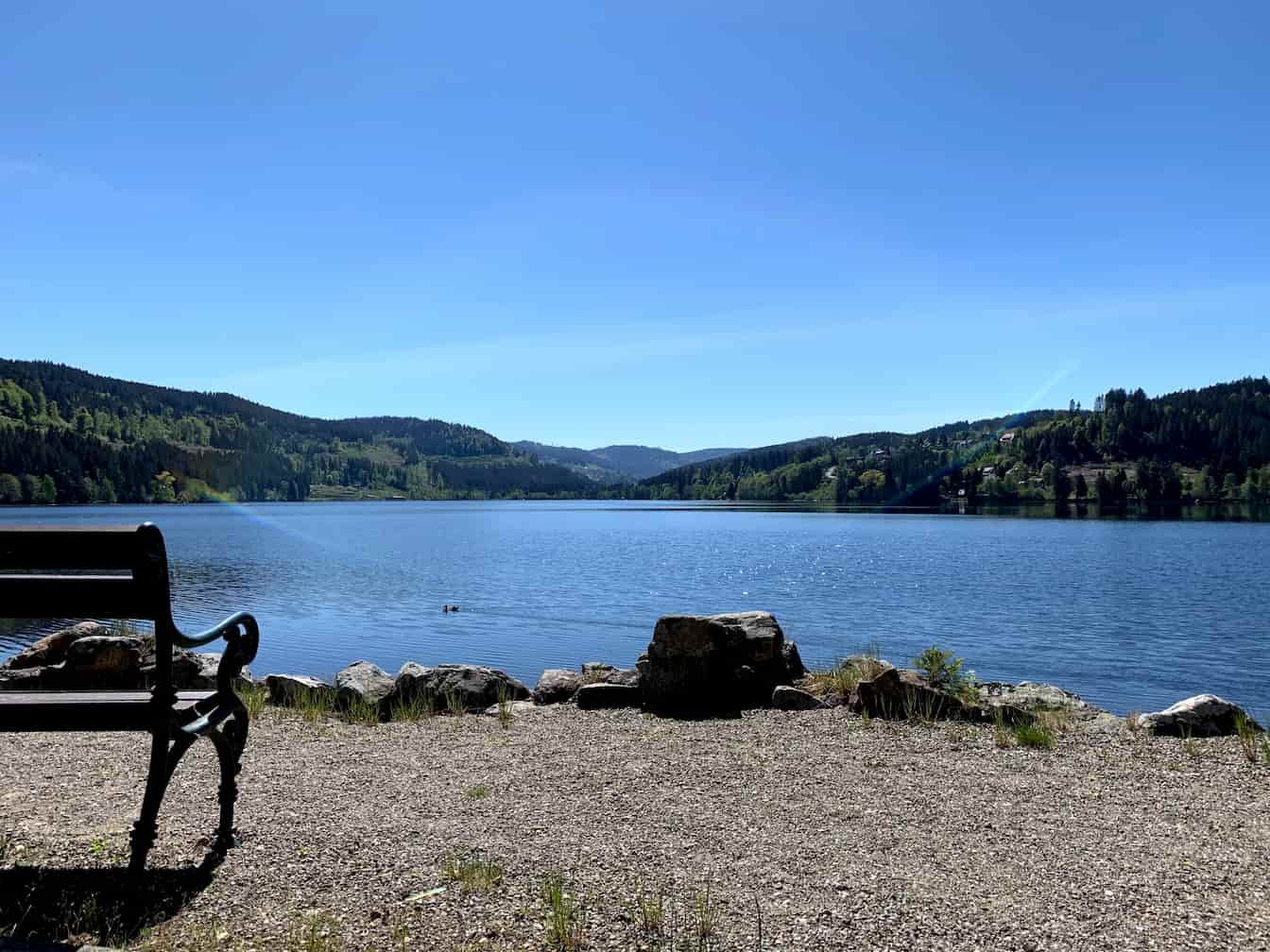 As it was already early evening we decided to sleep nearby and finally found a place near St. Blasien. There was a meadow next to the road and hidden behind some bushes we laid down our tarp and the sleeping bags. I was so exhausted after this day of cycling - 82 kilometers, never been cycling this long before - and fell right asleep after eating the rest of our wraps. 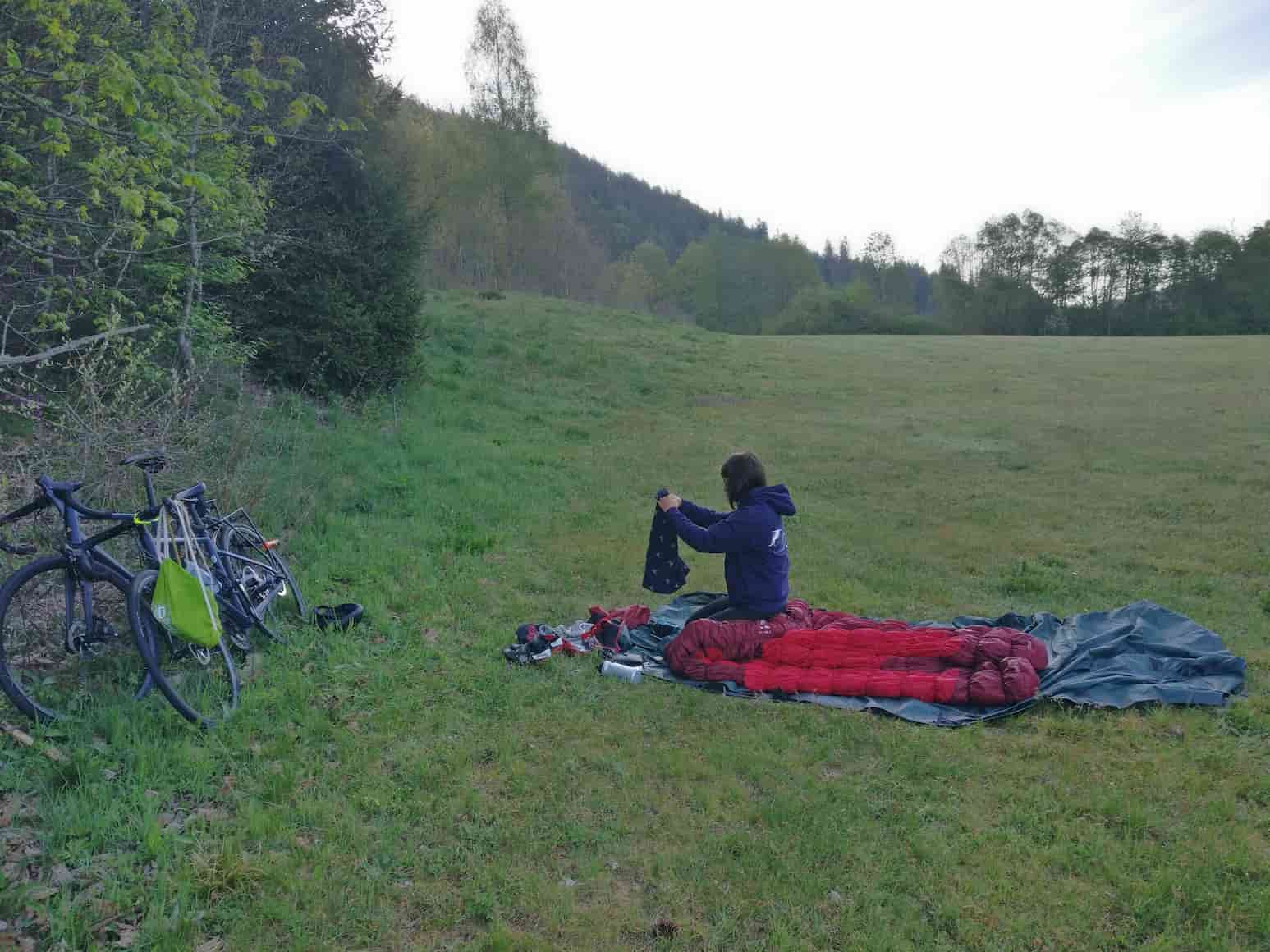 During the night it got a so cold, that when we woke up in the morning, the grass was wet and we were freezing. Swiftly we put back on our cycling clothes and continued the road in hope of getting warm again. The goal of the day was to get on top of the Feldberg and then back to Freiburg. Unfortunately we missed a side road and suddenly we were back at the Schluchsee. From there we started the long way up to the Feldberg. When we reached the pass height I was at the end of my strength so we had to walk the last two kilometers on top of the highest mountain in the black forest. Anyways, it was really beautiful and we had a great view with our picnic. 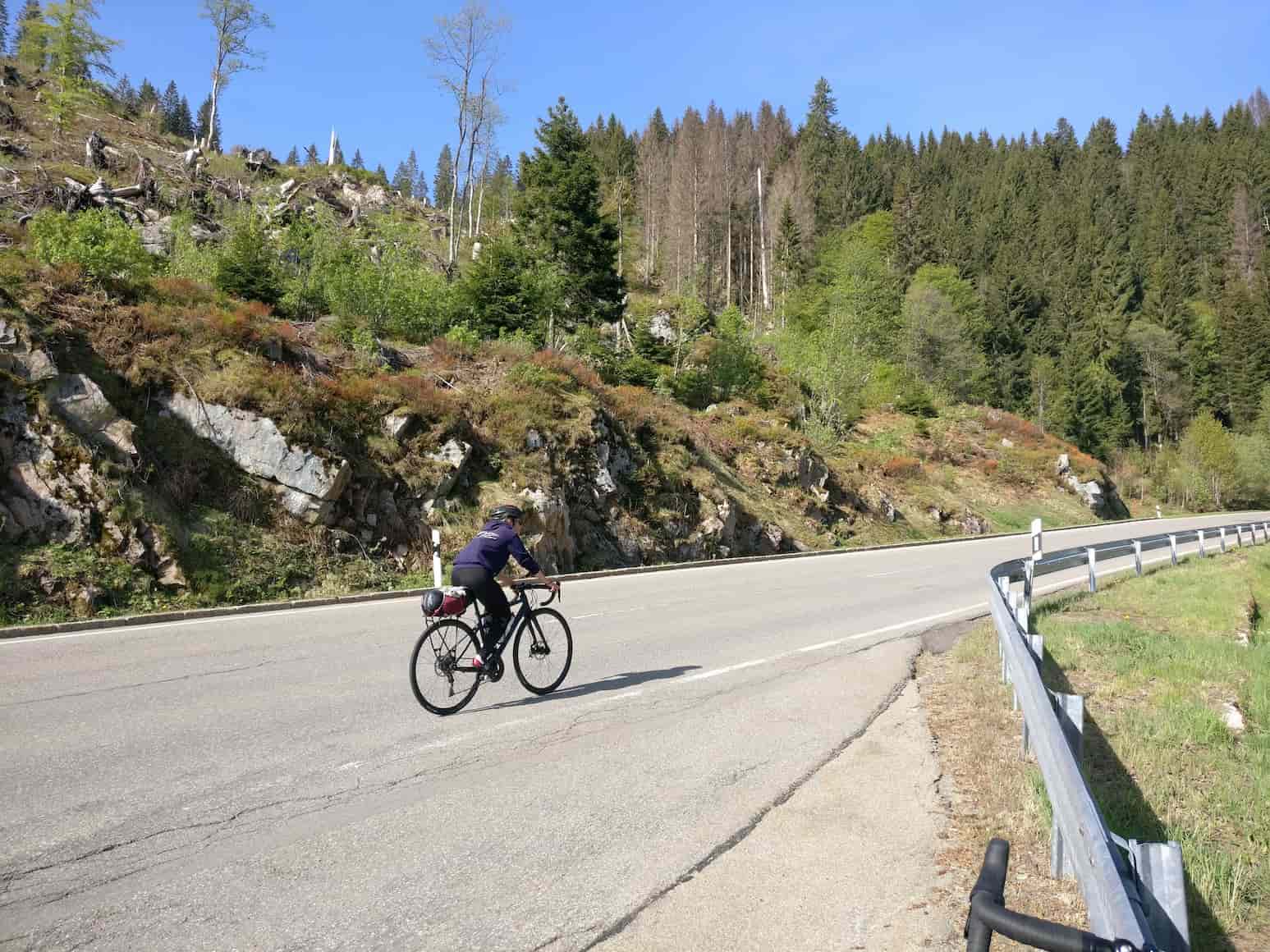 I was glad I made it and thought from now on it would be an easy ride down. Far wrong. The way down wasn’t a tarred road but gravel. This is fun with a mountain bike, but on a racing bike and without any energy left it’s just pain. We alternated between walking and cycling depending on how steep it was until we were on a tarred road again. At least I am in better control of the bicycle now…

After a last stop and a chocolate bar we went down a beautiful forest road to Oberried and back to Freiburg in the plain. I found a last bit of energy and came home savely where I fell straight asleep after a decent shower and food.

I think cycling is a great way to discover the area where you live - or probably any area. It’s so much fun, you can see so many things and it shows that it isn’t necessary to travel far to have an adventure. 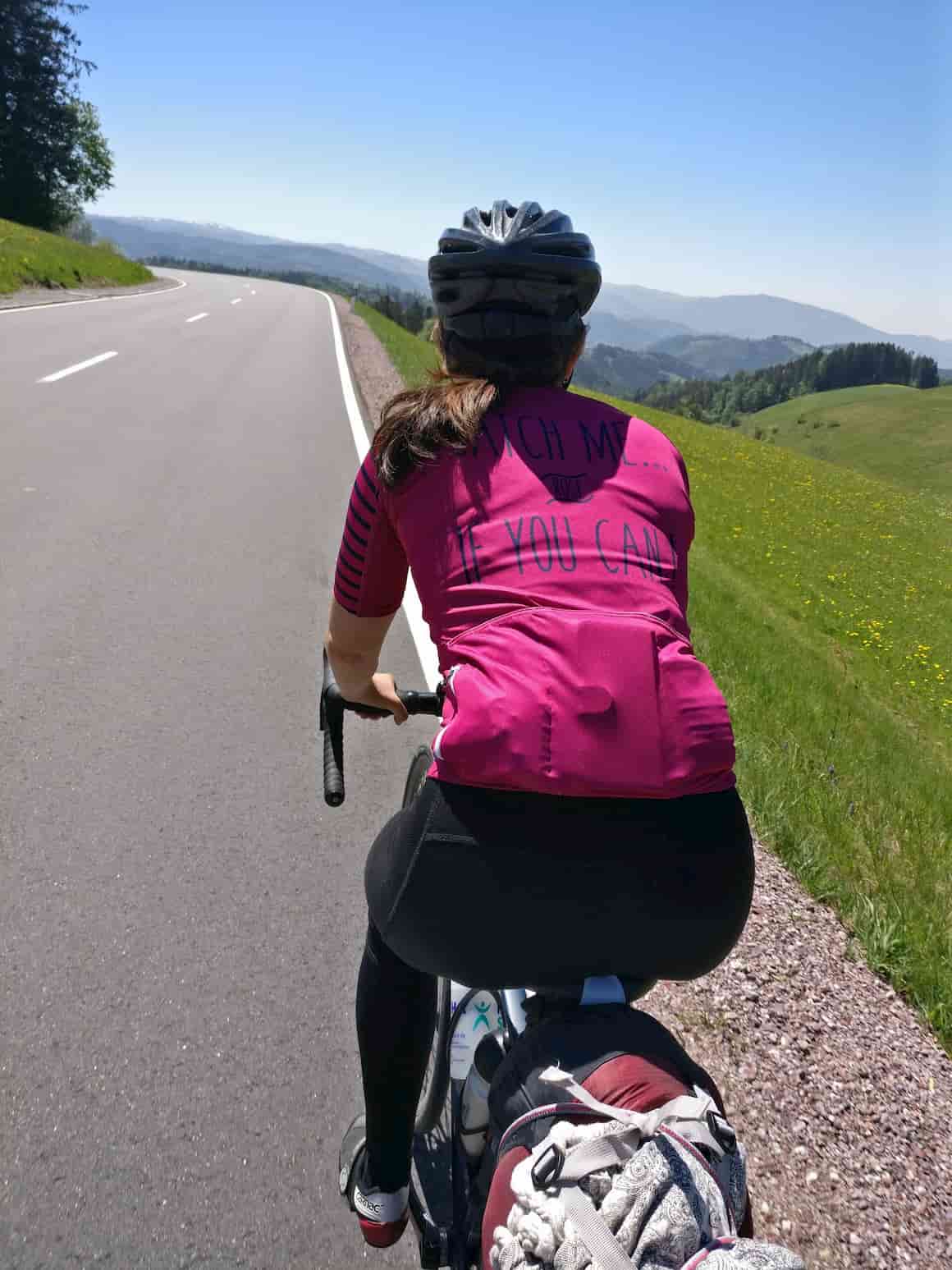 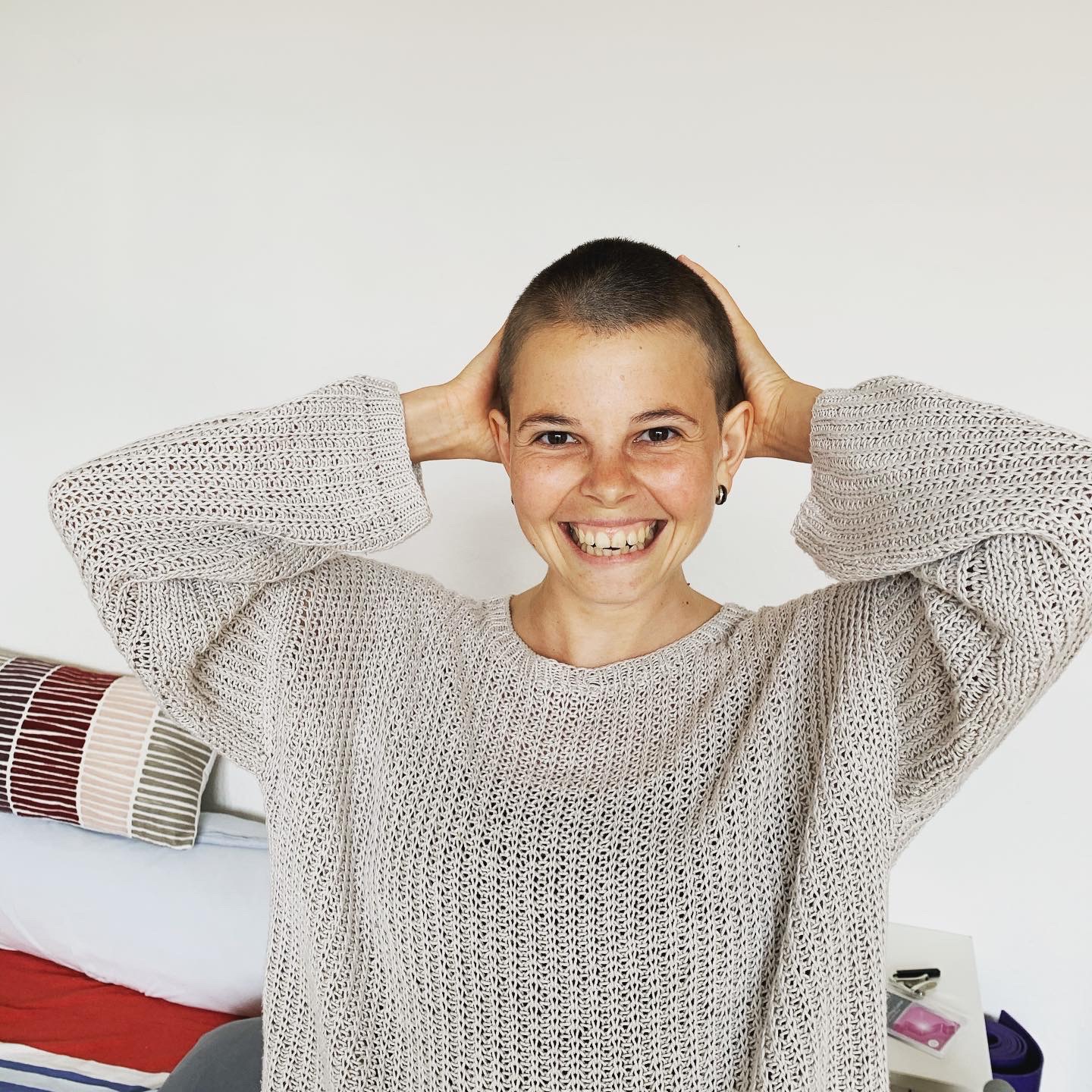